Sicep manufactures precast concrete segments for tunnel to be realized by TBM technology.

Sicep  manufactured  precast concrete segments for “Caltanissetta” tunnel, part of the SS640 Caltanissetta – Agrigento modernization works. The tunnel is being excavated by one of the biggest TBM of Europe.
The tunnel ring has an internal diameter of 13,45 m and an external diameter of 14,65 m. Their thickness is 60 cm and the length 200 cm.
Each ring, consisting of 8 segments plus a key segment, is universal as it allow, by rotating, to achieve curved parts in tunnels without the need to use segments with specific geometries.

For this production, Sicep has installed within Belpasso factory a carousel consisting of 4 complete sets of moulds (36) moving through the different process phases and two steam curing lines where the moulds pass before demoulding phase.
After curing for 24 hours in the indoor storage area, the segments were overturned, finished and moved in the outdoor storage area, ready to be transferred to the building site.
The manufacturing phases were the following: moulds opening, segment demoulding by a suction cup hooked to the overhead crane, moulds cleaning and application of form-release agent, reinforcing bar positioning, concrete casting by air transport system, moulds closing, extrados surface polishing, curing in the steam kiln.
Sicep achieved from the certification institute ICMQ the CE Marking for concrete precast segments for tunnel.
The daily production was 72 segments equal to 8 complete rings and more than 400 cubic meters of concrete.
The total production provided for the whole tunnel was about 36.000 segments, equal to 4.000 complete rings (8 km) and 205.000 cubic meters of concrete.

Tunnel “SICEP” is a licensed structure, designed to reduce the execution time of the surface tunnel to be built in the open air.
Building’s design characteristics allow to support high overloads and considerable dimensional flexibility with reduced thickness. Supplementary castings for completion work are extremely reduced and do not require any further skills or particular fittings . The system has a prefabricated foundation and shape details has been studied to position an efficient waterproofing even in the most severe condition.

Sicep produces a wide range of bridge beam sections, with height from 70cm to 180cm and with different sections ( double T, wide bottom flange, wide upper flange).
SICEP’s technical and commercial office is defining projects and estimates for every single designer’s and company’s need.
The activity extends to the production of bridge beams in moveable work sites, a preferable solution for structures with considerable weight and extend. 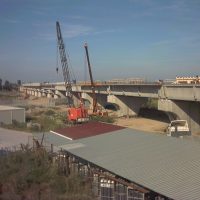 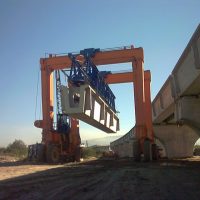 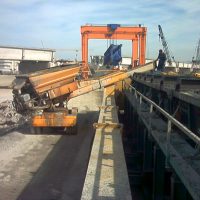