Imagine having to run a design using a pen so thin that its section has the thickness of an atom, and that such a design, consisting of thousands of lines, must be done on a sheet of a few millimeters from the side; imagine also make hundreds of these drawings on sheets so thin that you can superimpose all without exceeding the overall thickness of a few thousandths of a millimeter.
This bizarre problem underlying the manufacturing process of electronic microcircuits contained in all devices of which today we make extensive use.

Microcircuits, in fact they are designed to the computer with a cad, printed on special racks, photographed and shrunken, then stacked in layers.
Equipment called “photoexposures”, reading the data contained in the projects “impress” microprocessors using the film as “slices” of pure silicon, like a pen “electronic brush” and as ink atoms conductive metals such as gold or platinum , all with the precision initially described, is obtained through the technology contained in them, both through active media can not transmit the vibrations to the equipment above the most dangerous (ie those whose frequency is contained in a certain range), both through the structures of the buildings that contain such equipment, designed and built in such a way as not to transmit movements and forces induced by the surrounding environment, including those from the wind, the cars passing in the surrounding streets etc.

The core of the module M6, called FAB is a collection of buildings that satisfy the above structural requirements.
These buildings have also further design feature: they are equipped with a slab of considerable thickness (waffle) with openings through which air passes kept in motion by powerful turbines, forced to pass through absolute filters that remove any impurities up to the limits extremes.

Indeed, the presence of dust particles in the atmosphere where they operate these devices affect the function of final products: microchips. The name typical of these environments is “clean room” or “clean rooms”.
These are just two of the structural peculiarities of the module M6, that, with all other adjacent bodies (support, chemical, mechanical, etc.) Is in Europe and the world, one of the largest industrial companies in the field of microelectronics.

The M6 (briefly as it is called), excluding offices, has been almost entirely prefabricated in the factory, less than some parts such as the nuclei scale / lifts, foundations, the steel roof of the fab (consisting of trusses from 70 meters ) and hot flashes plan.

It ‘was a challenge issued by the Client STMicroelectronics, driven by extreme competition in the market in which it operates, require the implementation of the module in a little over a year, in order to anticipate the competition in the market launch of “slices” produced with new technologies. STM is increasingly at the forefront of research, developed in collaboration with prestigious organizations such as the National Research Council and the University of Catania, who for years, thanks to STM, he rose to the top of Italy’s best universities.
The challenge was accepted by the Company and by Pizzarotti SICEP, which, in a few months from the order, have implemented the project and made the work in the time allotted.

STMicroelectronics is a Principal for which SICEP has already realized, alone or with other large companies such as Castle and Impregilo, modules L7, L7bis (research laboratories), M5-extension (office), M9 (fab) and two of portaimpianti three underground tunnels that connect most of the first settlement of the entire industrial STM.
The company Pizzarotti, who first worked for STM, with the role of general contractor, has brilliantly and effectively managed the construction site.

Considering the limited time set by ST Microelectronics was essential to involve in the project SICEP external structures, design and other establishments of prefabricated that operated under the strict control of technical SICEP.
All bodies that make up the module were prefabricated from the foundations, pillars providing full height, beams cap and c.a.v., waffle slabs in c.a.v. , Tiled pi in c.a.p. , And panels.

The numbers and the dates that tell the prefabrication are:

The facades of m6 are made with special panels of thickness 24 cm and 15, fitted on the outer face of a deep ribbed 4 cm and 8.5 cm step (modular) whose projecting part has been obtained with the matrix rubber to effect “split stone”. The outer layer was also made of concrete packed with marble sand, in order to give a shade “light beige”, in harmony with the surrounding environment. Even the seals were made with putty-colored in the withdrawal of the frets so make disappear the squaring of the panels. The care of these details has given to a building so challenging landscapes, a natural and harmonious impact and that highlight the preciousness architectural entrusted to a non-trivial interpenetration of volumes, of flat and curved surfaces, and planimetrically altimetrically filleted. The effect of splitting the stone, which characterizes the panels, as if to express a concept primordial, enhances the relevance of materials and colors of coatings and windows, being able to express a whole vocation hi-tech industry STM .

For prefabrication, SICEP employed and coordinated the following resources and equipment:

For the M6 was requested finishes of high quality and very tight geometric tolerances.
On all the prefabricated has intervened both in production and in the pipeline in order to render the surfaces of the articles ready application of subsequent coatings Epoxy
In production was necessary to apply a control procedure on 100% of the pieces in order to monitor the geometry of each individual part, acting on formwork with continuous adjustments.
Similar controls were also made during assembly in order to verify the position “absolute” of each piece “in space” with respect to the project. Indeed, given the magnitude of the work the absence of such controls would otherwise arise from the accumulation of errors.
This required strict controls sull’appiombo of the pillars, on the alignment of the artifacts and error checking with statistical techniques.

Finally we thank all the companies that have worked with the SICEP in the design, construction and assembly work:

SICEP in multi floor is much more than a manufacturer of components; Sicep is a developer of cutting-edge solutions. 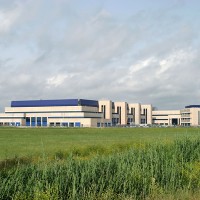 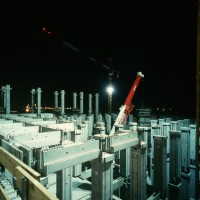 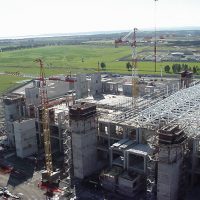 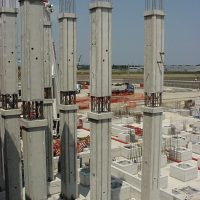 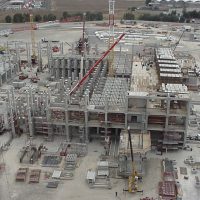 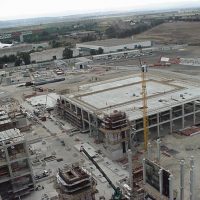 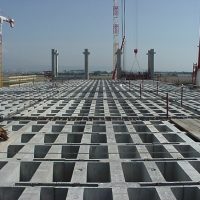 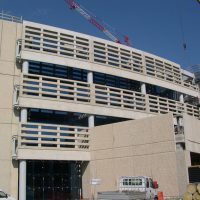 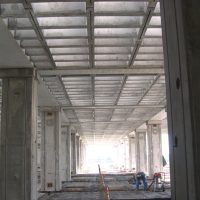 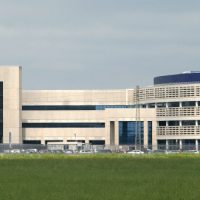